. Decades after the diamond discoveries in NSW, Ashton Exploration discovered diamonds near , by following a trail of kimberlitic indicator minerals in 1976.  The mineral trail led to diamondiferous lamproite in the Ellendale field (Tertiary). In August 1979, diamonds were found in Smoke Creek, more than 350 km to the northeast. In October 1979, the Argyle lamproite (1.2 Ga) was discovered (Atkinson and Smith, 1995).  Both lamproite fields are located within Proterozoic mobile belts cratonized around 1.8 Ga and were tectonically active until the Devonian or later (Jaques et al. 1982, 1983; Atkinson and others, 1984). Presently, about 450 lamproites, kimberlites and lamprophyres have been identified in of which more than 180 are diamondiferous.  Some of the recently discovered kimberlites yielded minor to significant diamond grades (Berryman and others, 1999).
Production began in the mid-1980s at the Argyle mine resulting in becoming a leading diamond producer.  At full production, the mine yielded more than 30% of the world’s annual production. Further development of the open pit continued into 2001, and the current operator (Rio Tinto) reported plans to expand operations underground.
Diamonds were recovered from the placer mine in the lower reaches of Limestone Creek, 12 miles (20 km) northeast of the Argyle.  This deposit was discovered in the early 1980's and mined by Poseidon/Freeport and from 1988 until late 1995 (Biggs and Garlick, 1987).  The plant was inactive at the end of late 1995, after nearly 7 million carats were produced from 24 million tonnes of gravel.
Kimberley Diamond Company acquired the Ellendale leases previously held by Argyle Diamond Mines.  Initial bulk sampling results from Ellendale 4 and 9 revealed higher ore grades near the surface.  The company reported the Ellendale 4 resource at more than 2 million carats to a depth of 450 feet (140 m) (23 million tonnes at 0.088 carat/tonne), which included a higher-grade zone (444,000 tonnes at 0.261 carats/tonne) to a depth of 9.6 feet (3 m). The near-surface enrichment zone was part of the mining target for 2002.  Primary diamond resources of Ellendale 4 and 9 were estimated at more than 2.6 million carats.
For the first three years of operation, 2.2 million tonnes of ore is expected to be mined from the top 9.6 feet (3 m) of enriched material on both Ellendale 4 and 9.  The ore is estimated to average 0.15 carats/tonne.  The company also reported the discovery of 11 previously unknown lamproite pipes in the area (Shigley and others, 2001; MiningNews.net, ).
The Merlin mine, which was developed on a group of 12 diamondiferous kimberlites in northern , yielded the country’s largest diamond, the 104.73-carat Jungiila Bunajina (“star meteorite dreaming stone”) white diamond.  Merlin is located 50 miles (80 km) south of Borroloola.  After 6 years, it was announced that the mine would close at the end of the 2002 due to marginal ore.
’s total diamond production in 2001 was 26.2 million carats, a decrease of 0.4 million carats from the previous year.  The Argyle mine (26.1 million carats) accounted for nearly all of the Australian production. The Merlin mine in the produced 55,000 carats making it the second largest Australian producer in 2001.
A diamond rush occurred in in 1725, and by the end of 1729 several diamond placers had been found in eastern in the region of (“diamond city”).  Placers were also found along the , , Goyas, and other streams in southeastern . In 1844, rich diamond placers were found in another region of —the state of to the north. During the first 120 years of mining, about 10 million carats were recovered, including some weighing more than 100 carats.
The primary source of the diamonds has not been found, and it was initially assumed that a rock referred to as itacolumite (micaceous sandstone) was the source. This assumption was based on the presence of middle Proterozoic diamondiferous conglomerates that have supported some small mining operations in the area.
The large number of diamonds found in placers suggests that major primary diamond deposits will be found in some day.  Since 1967, a systematic exploration program identified more than 300 kimberlite, lamproite, kamafugite, and melilitite intrusives, none of which contain economic amounts of diamond (Bizzi et al. 1994; Meyer et al. 1994).  A total of about 55 million carats have been recovered from with annual production averaging about 1.2 million carats.
Diamond deposits in the Liaoning Province of China are associated with kimberlite.  More than 100 kimberlites are found in this region including the Jingangshi kimberlite, which contains commercial amounts of diamond (Sunagawa, 1990).  At another locality, the Changma mine in the near Mengyin, about 500 km southeast of , is ’s largest diamond producer.  This deposit was initially mined as open pit over the past several decades and converted to underground mining in 2002 with an expected life of another 30 years.  The Changma deposit consists of a couple of kimberlite diatremes and a dike that all merge at 40 m below the surface.  The kimberlite has been drilled to depths of 600 m.  Production from the mine during the past 30 years included 1.6 million carats recovered from ore that averaged 1.27 carats/tonne: the largest diamond was a 119 carat stone. The property has an indicated resource of 1.4 million tonnes of ore at a grade of 0.92 carat/tonne with an inferred resource of 1.5 million tonnes of 0.63 carat/tonne.  The Changma property includes 9 diamondiferous kimberlites with a total measured and indicated resource of 9.7 million tonnes at an average grade of 0.055 carat/tonne (Beales, 2004).

India
Diamonds were initially reported in the Golconda region of India from medieval time to the 19th century. Golconda was actually the market place, and the actual source of the Indian diamonds were placers in the Penner, Karnool, Godvari and Makhnadi rivers in the Krishna Valley, and possibly in the Panna diamond field to the north in south-central India (Mathur 1982). Many of the better diamonds ended up in the royal treasuries of sultans and shahs of India and Persia. Total production is estimated at about 12 million carats (Milashev 1989).

The majority of the diamonds was found in placer deposits (Sakuntala and Brahman 1984), although diamonds were also found in the Majhagawan lamproite as early as 1827. After kimberlite was described in South Africa in 1877, intensive exploration in the ancient diamond-producing areas of India resulted in the discovery of what was thought to be kimberlite in areas adjacent to many placers (e.g., Majhagawan and Hinota near the Panna placer district, and the Wajakurnur and other intrusives in the Anantpur district). Years later, petrographic studies of some Indian ‘kimberlites’ confirmed that many were actually olivine lamproite (e.g., Majhagawan and Chelima) (Scott-Smith 1989; Middlemost and Paul 1984; Rock et al. 1992). Diamonds recovered from the pipes are mostly transparent and flawless, with dominantly octahedral and dodecahedral habits. About 40% are gem quality (ore grade ~ 0.01 carat/tonne).

Mitchell and Bergman (1991) indicate there are several other lamproites, kimberlites, and peridotites in this region, and Rock and others (1992) also report several olivine lamprophyres and minettes of potential economic interest occur in eastern .  Known kimberlites in are primarily Proterozoic in age and include diamondiferous kimberlites in the Wajrakarur field in the Andra Pradesh of the southern kimberlite province and kimberlites in the field in southeastern Madhya Pradesh in the central province (Middlemost and Paul 1984).

The official discovery of kimberlite in occurred in 1954 at what later became known as the Mir pipe (Erlich and Hausel, 2002).  In 1957, development was initiated on placers associated with the Mir pipe and was followed by open pit operations in the kimberlite.  Years later, operations ceased at a depth of 1090 feet (340 m).  The average ore grade was high in the upper mine levels (4.0 carats/tonne) but decreased near the bottom of the pit (1.50–2.0 carats/tonne).  The Mir had high gem to industrial diamond content and was the source of several large gems including the Star of Yakutiya (232 carats) and the Diamond of 26th Party Congress (342.57 carats).  Annual output from the mine was 6.0 million carats (Miller 1995).

The Udachnaya pipe was found in 1955 and mining began on the associated placers in 1957, followed by open pit operations in the pipe.  Udachnaya has been the most productive diamond mine in with more than 14.4 million carats mined of which 80% were gems.  By 1956, over 500 kimberlites had been discovered in the .  During the next 30 years, became the third largest producer in the world: nearly all its production came from mines within the northern Siberian platform.
In 1960, the Aikhal pipe was discovered in Yakutiya: mining began in 1962 and ceased sometime between 1981 and 1988, presumably due to overproduction from other sources. Production resumed after 1988, and by 1995 the pit reached a final depth of 770 feet (240 m).  Annual production at the peak of mining was 600,000 carats at an average grade of 1.0 carat/tonne (Yakutalmaz 1999).
Another commercial pipe, known as the Sytykanskaya was discovered in 1955. Open pit mining began in 1979, and 600,000 carats/year were produced (average grade of 0.60 carat/tonne).  The mine was scheduled to close in 2001 (Yakutalmaz 1999).  Another commercial diamond mine, the Internatsional’naya pipe, was found in 1969.  Mining began in 1971 and the open pit was developed to a depth of 900 feet (280 m) by 1980.  Open pit operations ceased but plans were made to resume mining underground.
The 23rd Party Congress pipe was discovered in 1959: mining began in 1966 on this very rich pipe. The ore averaged 6.0 carats/tonne and the open pit reached a depth of 395 feet (124 m) after 15 years of operation.  The Jubilee (Yubileinaya) pipe was discovered in 1975.  Following the removal of 225 to 320-ft (70–100-m) of basalt overburden, open pit mining began: the Jubilee was anticipated to replace production from the declining Udachnaya pipe.
During the 1970s, other diamondiferous kimberlites were discovered within the Russian platform.  At about the same time, several kimberlitic pipes were discovered northeast of the city of , which included the Lomonosov diamond deposit. Currently, is the 4th largest producer of diamonds in the world (by weight).  The of Natural History reported that the country has produced a total of 332 million carats and currently has an annual production of 10 to 12.5 million carats.
In 1890 and 1901, secondary placer deposits were discovered in and , and near the end of the 1960s, a placer deposit was found on in southeastern .  To mid-1969, 1.3 million carats had been mined; the largest stone weighed 12 carats.  In September 1971, near the town of in the state of Bolivar, another significant placer was discovered.  Within a short period, monthly diamond production from the Salvacion region reached 50,000 carats but the source of the diamonds remains unknown.
Other Cratons
Several diamondiferous pipes have been reported in other cratons such as in the region, and also in Kazakstan.  Kazakstan also has the added attraction of having some very unusual and very rich unconventional metamorphic diamond deposits – but most of the diamonds are low-value industrial stones (Erlich and Hausel, 2002).
Posted by The Gem Hunter at 5:36 PM 3 comments: 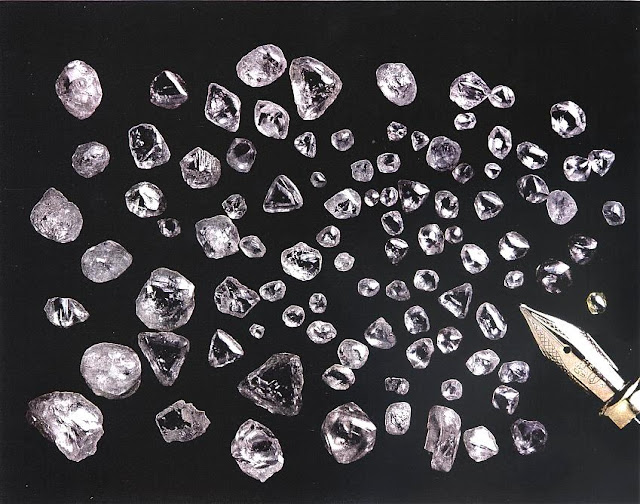